Can Turkey be an education base?

Educators and representatives of outstanding private schools and universities from Turkey and the world discussed “How can Turkey be an education hub?” in the 2nd international meeting held by Directorate of National Education and Horizon Study Abroad in İstanbul. Turkey has the least number of international students which is 1%, same as Poland, among all the OECD countries. To increase this share in the international student market which is expected to grow up to 250 million dollars, what needs to be accomplished is approached in the meeting by government and private sector together.

In the meeting which is organised by Horizon Education Group in company with İstanbul Provincial Directorate for National Education and held in Kabataş High School Cultural Centre, local and foreign specialists evaluated the paths to be followed to make Turkey an education hub and suggested ways that can be course of action.

The panellists including Craig Dicker USA consul and Culture and Media consul, Dr. Mustafa Aydın president of Education Commission of Foreign Economic Relations Board, Prof. Dr. Mehmet Karaca the rector of İstanbul Technical University, Dr. Gürsel Sönmez vice president of Presidency for Turks abroad and related communities, Dr. Heiko Walkenhorst the director of Jacobs University in Germany, pointed out that the essential elements of establishing the education hub are financing, real estate, insurance and human resources as well as the education quality.

Mehmet Gültekin, Chairman of the executive board of Horizon Study Abroad and organiser of the program indicated that international students consider education quality, employability, accessibility, being supported financially, security and living standards while choosing the countries that they will study in. He stated that it is not impossible to make Turkey an education hub and he said “as long as a structure is established based on scientific qualification”. 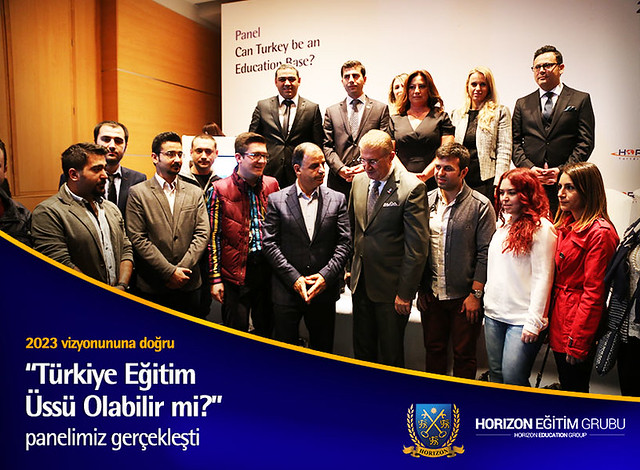 It is not only about opening schools, more integrated approach is needed, said Dr. Mustafa Aydın and he remarked the importance of marketing good opportunities in Turkey. In the panel where the subject was also the problem of foreign language, it is emphasised to increase the number of schools that is globally interacted and to improve language education.

In case of not making Turkey an education hub, the branches of international education institutions will dominate the market like in fast food chains, indicated Dr. Gürsel Dönmez. He stated that bringing foreign students with government scholarship does not serve to the purpose of establishing a competitive environment.

In the panel, it is indicated that international students mainly focus on science, technology, engineering and Maths as well as marketing and management subjects that demanded with a growing rate. ITU rector Prof. Dr. Mehmet Karaca underlined that social sciences should not be forgotten.

Therefore, Turkey has all the opportunities, physical environment, organisation and sufficiency. To turn these reflexes of our country in such circumstances into a larger scale strategic mind and vision, to spread them globally, to invest and to make empirical moves required by 21st century will bring positive changes towards 2023 aims” and ended the panel.

The event hosted more than a thousand visitors and followed by more than 300 people. Through “vitamin öğretmen” portal which is a special platform created by Sebit Education and Information Technologies for teachers, the event was streamed in Turkey and received thousands of comments in social media by #EğitimÜssü hashtag.

Besides the panel, 30 world-wide prestigious universities that attended the event not only opened stands but also gave presentations in classrooms to students through parallel sessions.

The event also hosted honour board in the same day. With the collaboration of Horizon Education Group and İstanbul Directorate of National Education, “International High School Accreditation” project which is started in May, 2013 and gives a chance to students in state schools to enter in world’s universities and includes Cambridge University International High School Programmes.